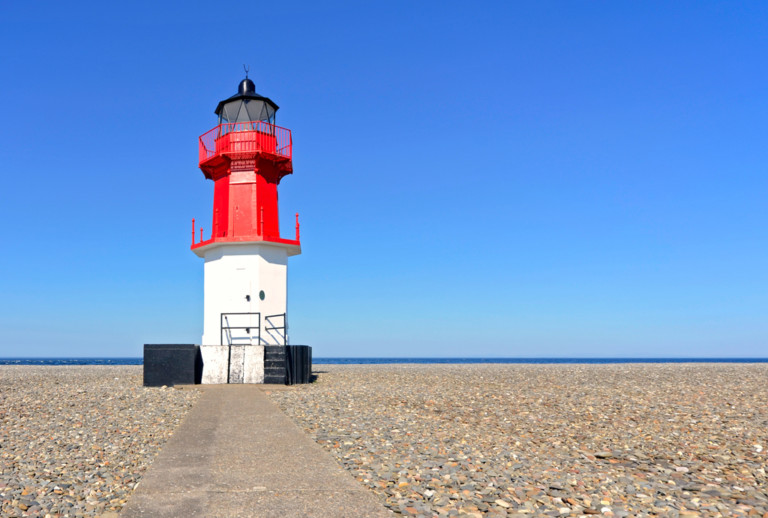 There are over 20 lighthouses around the coast of the Isle of Man. Most of which are still working. The earliest established harbour lights were in 1650 at Derbyhaven. The earliest recording of lights at Douglas harbour dates to 1671.

There are three historic lighthouses on the Calf of Man . The first two being built in 1818 and 1819 (used until 1875) and a later 1968 lighthouse which is 11 meters high. It was automated in 1995. This lighthouse was closed in 2007 when it was decided that the Chicken Rock lighthouse should be used instead.

The lighthouse was seriously damaged by fire in 1961.

Carrick Rock – Not a lighthouse but an 8 meter high black and red lattice tower. It gives two quick flashes of white light every 5 seconds.

There are two lighthouses in Castletown. One on the Irish Quay and one on the New Pier. Standing 5 and 8 meters tall respectively.

Irish Quay – was built in 1944. It is 5 meters high with a continuous white light.

New Pier -was built in 1849. It is 8 meters high with a red flashing light which shines 13 seconds on followed by 2 seconds off.

There is also a green metal tower on the North side of the harbour.

Conister Rock – In 2008, lights were added to the The Tower of Refuge built in 1832, including a flashing white light.

Douglas Head – Built in 1892, by David and Charles Stevenson  to replace the earlier 1832 lighthouse designed by Robert Stevenson. It is 20 meters high. It flashes once every 10 seconds and was automated in 1886 with a LED Marine Lantern replacement in 2018.

Douglas Harbour – Located on the South side of the harbour. It is 9 meters tall with a red flashing light.

There is also a Tower which is now part of a hotel which was converted to flats.

The Herring Tower – Built in 1811 at Dreswick Point was so called because during the herring season a fire was lit at the top.

Laxey has two lighthouses. One on the Breakwater and one on the Pier.

Breakwater – Built 1946. It is 7 meters tall with a constant white light.

Pier – Built in 1941 to replace an earlier 1891 lighthouse. It is 4 meters tall with a constant white light.

Maughold Head – Completed in 1914 by David and Charles Stevenson. It is 23 meters high and flashes white every 30 seconds. It was automated in 1993.

Peel has four lighthouses and a tower.

Breakwater – Built in the 1850s. It is 11 meters high with a flashing white light.

The tower is inside Peel Castle.

Point of Ayre – Built in 1818, by Robert Stevenson. It is 104 feet (32 meters) high. It flashes every eight minutes and was automated in 1993. The Met Office at Ronaldsway uses the Point of Ayre for its weather reports.

Port Erin Front Lighthouse – Built in 1884 and standing 11 meters high. It has a continuous red light.

The Shore Station – Built in 1886 for lighthouse keepers at the Calf and Chicken Rock.

There are two lighthouses. One on the North pier and one on the South pier.

North Pier – Built 1864. It is 8 meters high with a flashing green light

Thousla Rock – Built in 1981,  it is 9 meters high. It flashes red every 3 seconds. Located in the Calf Sound (between the Island and and the Calf of Man).

The Winkie – Built in 1951 and 10 meters high. The Point of Ayre is made of shifting gravel, as a result this second lighthouse was built closer 250 yards closer to the new sea line.