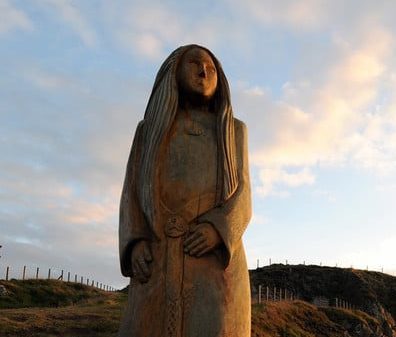 A life-sized statue, by Bryan Kneale, of Sir Thomas Henry Hall Caine, stands in the Kaye Memorial Gardens at the base of Summerhill. Hall Caine wrote “The Manx Man” among other books.

The statue of the soldier at the top of the Harris Memorial, called “The Manxman” was sculpted by Harry Hems and Sons and finished by Thomas Quayle Stonemasons in Douglas. It was unveiled by Lord Derby in 1924.

The Villa Marina Gardens has a few wooden statues and carvings: Fish Totem by Gavin Carter, Dragon by Simon Capelen and Rainbows by Jill Gillings.

The Sir Norman Wisdom, who sits outside the bar named after him, was created by Amanda Barton, who is responsible for a number of bronze statues around the Island and several in Douglas, including: George Formby, Sir William Hillary on Douglas Head and Thomas Edward Brown, on the corner of Circular Road (without his traffic cone party hat), in 1998.

Norman Wisdom was an English actor, comedian and singer-songwriter best known for a series of comedy films produced between 1953 and 1966 involving Norman Pitkin. He retired to the Island following a long career.

George Formby also an English actor, singer-songwriter and comedian in the 1930s and 1940s, stared in “No Limit” in 1936, which was filmed on the Island and includes the song, “Riding In The T.T. Races”.

Sir William Hillary, 1st Baronet was a British militia officer, author and philanthropist, best known as the founder, in 1824, of the Royal National Lifeboat Institution.

The Bee Gees,  musicians Barry, Maurice and Robin Gibb are cast in bronze, on Loch Promenade, in the gardens. The statue was sculpted by Andy Edward in 2021.

The statue of Robert Steven Hizzy Hislop in his memorial gardens overlooking Douglas was designed by  David Annand.

The Three Legs of Man, which stands outside Ronaldsway airport is by Bryan Kneale MBE, who was born in Douglas in 1930. He later became a member of the Royal Academy of Arts where he taught sculpture between 1982 and 1990.

Bryan Kneale is also responsible for the statue of Captain John Quilliam RN, who was born in 1771,  in Marown, and went on to serve as first lieutenant on H.M.S. Victory during the Battle of Trafalgar.

The Vikings outside the  House of Mannanin, were created by Amanda Barton, in 1997.

St German’s Cathedral has several statutes inside and in the garden, including:

Queen Elizabeth II School, has a few works of art, including pieces by Gavin Carter.

“When I Grow Up”, was a commission for the Royal National Lifeboat Institution Ramsey and created by  Darren Jackson 2012.

The Viking Chess Players in the main square are by Amanda Barton.

The Viking Benches, in Parliament Square are by Nick Barlow.

The Children playing outside the Hodgson Loom Gallery are by Amanda Barton.

The Laxey Miner, commissioned to replace an earlier wooden statue was carved in stone by  Ongky Wijana.

The door to the Port Erin Arts Centre was executed by Michael Sandle in 1997.

The memorial statue to Joey Dunlop is by Amanda Barton.

The memorial statue to Illiam Dhone is by Bryan Kneale.

The outside of the Manx Museum, is decorated by illuminations by David Gilbert (1928-2016) and works by Bryan Kneale RA, as is Noble’s Hospital. While the Bay Room, inside the Manx Museum, contains sculptures of famous Manx people by various artists.

Several of the glens on the Island have sculptures, including:

The Heritage Trail and Summerhill Glen with some wood carvings by Tony Elder.

The Tynwald National Park and Arboretum.

Sulby Glen has a wooden wizard as does Ballaglass Glen which is made by Nick Barlow and David Reilly.

The Fenella, ash wood carving, created by  Nick Barlow, who also carved some of the statues in Summerhill Glen, together with the Silverdale Glen Welcome Wizard, in 2018.

Fairy Houses hidden in the glens are by Anonymouse MMX. They can be found at Bradda Head, Dhoon Glen and Ballaglass Glen.

In 2010 and 2013, Stephanie Quayle and Darren Jackson created an extremely large statue of Manannin for a music festival. Stephanie and Darren Quayle also made the large Loughton sheep.

Although not the Island, it is worth mentioning the bronze statue of Manannan Mac Lir, by John Sutton, which stood on Binevenagh Mountain, looking out to sea before being stolen.