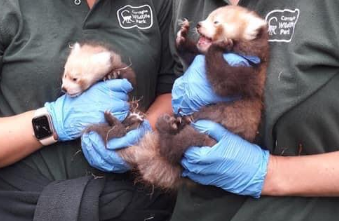 Krush Ailurus is going to have to put his adventurous bachelor days behind him. This good-looking Red Panda came to everyone’s attention just last year and has certainly proved that he is photogenic.  We all know, how being a celebrity, can increase your chances with the opposite sex. Was this Krush’s plan, when his daring exploits, were shown around the world? Escaping twice before settling back home again in Curraghs.

A few date nights, with the beautiful young Sara and the Wildlife Park has its own exciting news. Covid Cubs!

Sara had been living quietly next door to Krush and Frisco, when she was invited into their enclosure, at the beginning of March. Breeding season for pandas is between mid-January and mid-March. Sara is less then three years old, so this was more of an introduction, with no expectations. Pandas are usually solitary creatures, but Sara and Krush were seen together at the feeding platform and happy to pose for photographs. They looked very relaxed together. She had clearly got Krush’s attention.

By early June, keeper Emma was convinced Sara was pregnant. The panda couple stuck to traditional panda parenting. The fiercely independent Sara moved into the cubbing box to have and raise her cubs, alone. Krush can only admire from afar. They still eat together sometimes.

On the 4th of July, in the early hours of the morning, Sara gave birth to two beautiful, healthy, Red Pandas. A boy and a girl. Lockdown Baby Boom Cubs.

The Cubs are crawling about in the box but are not out in the enclosure yet. Currently they are just coming up to two months old. They will start coming outside at three months (around late September, early October). International Red Panda day is the 19th of September and the celebrity couple feel that sometime shortly after that date, would be a good time to show their beautiful cubs, to the waiting world. They have however, allowed this photo to be released, at the cubs first health check, together with keepers Emma and Carly.

Like all celebrity couples, Sara and Krush want to give back. Together with Frisco (the 17 year old Panda they live with) and with the help of the Curraghs Wildlife Park, they donated £1,200, from the conservation fund, to the Red Panda Network. The money went to the ‘Plant a Home ‘project in Nepal. The red panda (Ailurus fulgens) is a mammal native to the eastern Himalayas and southwestern China. They are listed as Endangered on the IUCN Red List because the wild population is estimated at fewer than 10,000 mature individuals and continues to decline due to poaching, habitat loss and habitat fragmentation. The charity is planting a corridor of forest to connect Red Panda habitats.

Our Pandas are doing their bit for wild Pandas.

Sara and Krush have yet to name their cubs. Curraghs Wildlife Park are receiving suggestions via their Facebook page so please log on to suggest a name or you can email their website.