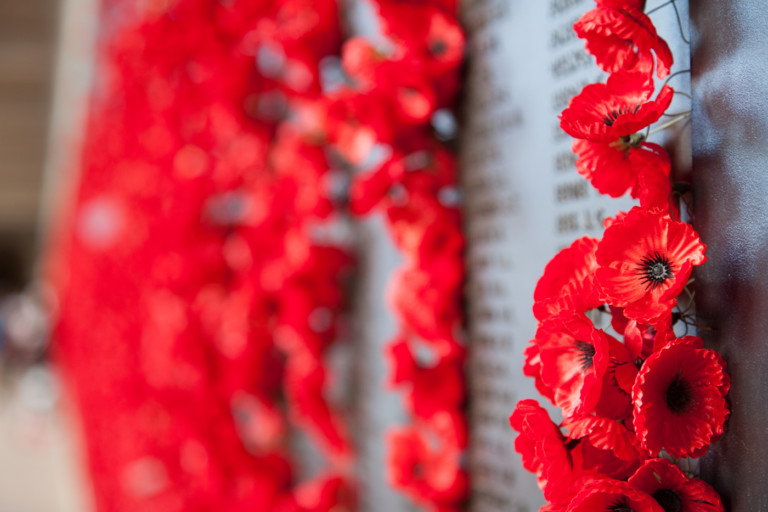 The Memorial Cross, on Douglas Head, originally made of red sandstone and inscribed with the words, “The Great War”, was destroyed in a gale and a smaller memorial is now in place. There is also a large stone anchor, dedicated to the contribution and sacrifice by the Manx, during the Battle of Trafalgar.

The Harris Promenade War Memorial, unveiled in 1924, was designed by Ewart Crellin, depicting a soldier in uniform, upon a tall tower, placed with the sea behind. The Island lost 1,165 service personnel during World War I, with 987 seriously wounded and 269 officers receiving medals of bravery. Listed alphabetically are 866 names from the Aden and First and Second World Wars.

Douglas churches with War Memorials are: St Andrews, St Barnabas’s, St Matthew’s and St Mary’s. There are also Memorial Plaques at Nobel’s Hospital, in some Isle of Man Banks, at the Manx Museum and Post Offices and two designed by Archibald Knox, one at St Ninian’s and upstairs, in the Law Courts on Deemster’s Way. The IOM Police Headquarters has a roll of honour.

Onchan has two memorials, one on the main road and one in the Dip at the entrance to the Village green (Memorial Garden).

Castletown has a War Memorial Cross located next to the Castle.

Ramsey’s War Memorial Cross, made from red sandstone stands in the main square.

Port Erin’s is next to the George Herdman Library.

St Patrick’s Church in Jurby has a large military graveyard, dating from the Second World War, containing the British, Polish and Australian servicemen who were based at Jurby airfield.

Memorial Gardens and Gardens of Remembrance can be found in Onchan, Port St Mary and among the Sunken Gardens of Douglas Promenade.

The Memorial Hall, in Union Mills, was built in 1903 and commemorates the soldiers of the West Riding Regiment, who died in the Boer War (1899-1902) and was later dedicated by Dalrymple Maitland, to his son, John Dalrymple Maitland who was killed in action in 1916.

The anchor which lies at Kallow Point is a memorial to those who lost their lives in Operation Dynamo in May 1940. During the 1990’s divers exploring wrecks off the French coast at Dunkirk identified the Mona’s Queen III. One of her anchors had become detached from the wreck and so it was the possible to bring the anchor home to the Island as a memorial to the wartime service of the ships and men of the Isle of Man Steam Packet Co., but in particular those lost at Dunkirk. The anchor was returned and placed so that the shank points in a South East directly towards Dunkirk.

The 381 Monument, marks where in 1945, a Boeing B-17G, flying from RAF Ridgewell to Nutt’s Corner in Ireland, carrying 29 military passengers and 2 crew, crashed into the side of North Barrule, killing everyone onboard.

On Castletown Quay, close to the old Police station, is a statue of  Captain Quilliam, who was first lieutenant on H.M.S. Victory during the Battle of Trafalgar. Quilliam steered the ship from the gun room after the ship’s wheel had been destroyed. His blood-stained Trafalgar uniform is displayed at the Manx Museum.